I love it when I find different references to historical stuff in non-historical texts. It's fun to discover something and then do the research to see if it's true. Connie Willis is one of my favorite science fiction writers and I found this passage in a book titled "Lincoln's Dreams." 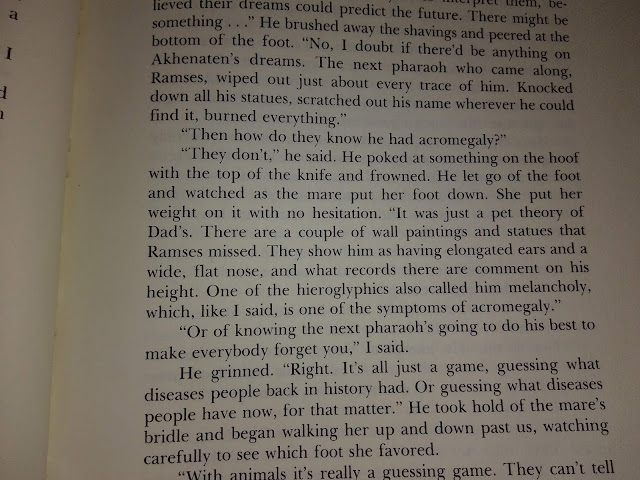 I have studied early Egyptian history and have a vague memory of studying Akhenaten. He is a very interesting leader because of his wife Nefertiti and his son Tutankhamun (King Tut in current lore.) He is the first Egyptian monotheist pharaoh and his apostasy from the 'true' Gods caused his future successors to try and erase him and his new religion from history. These successors were unsuccessful in erasing Akhenaten from all monuments and written documents and so we know his name and some of his reign today. Another thing we know is that his statues show a man with a very different physique than those who came before and after him. His face is depicted as long and thin; a body with larger breasts, thick thighs and a sagging stomach. While some egyptologists believe that these are stylized depictions, others believe that these depicted physical characteristics are a true representation... that the pharaoh did look this way... that he may have clear physical traits of illness.

What the illness might have been has been guessed at over the centuries. There is no illness that has been able to be definitively proven, but the diseases that are currently in the running are Marfan's syndrome, Homocystinuria, and Familial Temporal Epilepsy. One thing that potential removes Marfan's syndrome from the running is that a DNA test was performed on the mummy of Tutankhamun and was found to be negative. As Akhenaten's son, King Tut should have shown some markers of the disorder if it was available. However, Marfan's has not been fully ruled out for Akhenaten... it has simply been ruled out for Tutankhamun.

This was a fun exercise today. There appears to be no Egyptian authorities that suspect Akhenaten had acromegaly as Connie Willis suggests. From what is known at this point, there is no hard evidence for anything including even the possibility of illness. But this was a fun exercise all the same. I look forward to finding more references in other books. These flights of fancy distract me from difficulties in my own life and give me interesting things to roll around in my brain. Tomorrow will bring new things to think about. But for today, my mind is on Egypt and its rich and glorious past.

Posted by Badgerdown at 9:28 AM