The Curious Incident of the Dog in the Night-Time: A Review

Our protagonist, Christopher John Francis Boone, is our eyes and ears in this heart-rending tale of mystery, deceit and disability. Written in journal form, this novel tells the reader about Christopher as he attempts to solve a mysterious death of a dog and, through those investigations, discovers more about himself and the people in his life than he ever imagined.

This book begins with Christopher’s discovery of his neighbor’s poodle, who has been murdered; he discovers the dog bleeding on the ground with a pitchfork through its body. The reader then learns that Christopher lives alone with his father, that his mother is dead, that one of his neighbors has gone missing as well, and that he attends a special school where he does very well at math and is hoping to take A levels at some point. Determined to discover who killed his neighbor’s dog, he starts a journal to write down the clues he finds and to keep better track of the things he is thinking. While he is casually questioning the neighbors, one neighbor admits that Christopher’s mother had an affair with someone else from the neighborhood and, as Christopher continues to investigate, he learns that his father has lied to him- his father not only killed the dog, but he learns that his mother is actually still alive and is living in London with the missing neighbor. These discoveries are so hard on him that he runs away after a confrontation with his father and manages, with much luck and difficulty, to make it to his mother’s apartment. The story ends with Christopher’s father trying to regain lost trust and his mother single again with all parties trying to figure out how to live with and understand each other. 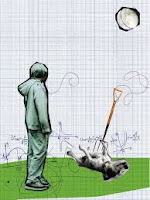 This novel is steeped in the challenges inherent in the lives of individuals with high functioning autism and/or Asperger’s syndrome: A pervasive developmental disorder in which the affected individual displays unusual nonverbal communication, difficulties with empathy and understanding the emotions of others, and other mental and physical symptoms. This particular book has many potential uses for a general education teacher. A teacher can use the texts to discuss different ways of thinking in general and autism in particular. Discussion of emotions, how they are expressed, and how we as individuals ‘read’ people’s emotions is also possible. As the protagonist writes the ‘story’ in journal form, creative writing about the students’ own lives could be encouraged as well. (One assignment could be for the student to write about how they would end the story after only reading the first two chapters. Another option could be writing about what metaphors are and why they can be confusing to someone with a logical mind.) Discussions of math and maps would also be relevant and assignments meant to enhance a student’s knowledge of these subjects would be worthwhile.

Giving this novel an overall rating is a bit challenging, but I finally settled on four stars. This book does several things very well: the protagonist is rather sweet and engaging and the reader finds themselves anxious to follow him through his life. We genuinely worry about him even though Christopher probably wouldn’t be able to acknowledge our concerns. The novel’s prose manages to let the characters express their emotions clearly even though the anger, fear, sadness, and frustration are never explicitly articulated. Through the actions and journal entries shared by Christopher, the reader is able to casually absorb information about Asperger’s syndrome and some of the challenges it can cause for individuals who live with this particular disability. The novel is well- written and the plot feels fairly flawless and begs us to understand and be patient with our protagonist as he navigates his challenges. However, while the written and sometimes strong language brings about positive reflection and understanding of the story, it also can turn off a reader and make it more challenging for some individuals to be willing to complete the book. The adult themes are appropriate- Christopher is 15 years old, after all- but these themes can also offend the reader or invite censorship. While this book is meant for young adults, its themes and plotline can be quite challenging for any reader including adults. This book has won awards for its storytelling including the Guardian Children’s Fiction Prize, Costa Book of the Year, the Boeke Prize, and the Waverton Good Read Award. I highly recommend this well-written novel by Mark Haddon for mature young adults and older students for an entertaining and educational read.

Posted by Badgerdown at 7:12 PM