A Short Film Review - "Exit Through the Gift Shop"

Warning- this review is full of spoilers..... 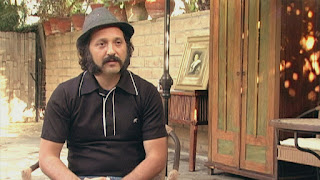 I found myself baffled and perplexed by this documentary- a hard feat to accomplish as it is my favorite film genre. I sat and watched amazing street artists who stencil, paint, and glue their way into our visual culture and lives… and the man named Thierry Guetta who became obsessed with filming these artists in action and over time became their co-conspirator… and then drops the filming to become a street artist in his own right named Mr. Brain Wash… in some ways selling out the artists who taught and educated him on their craft and allowed him to film them because of their belief that he would help express the importance of their art and their passion… this was an interesting mind cluster of high proportions! 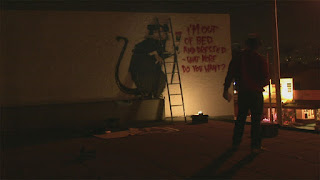 Thierry started filming those in his everyday world as a coping mechanism for loss and to record the movements of those around him so that they could “live forever in those moments.” Over time he started following and filming street artists beginning with ‘Invader’ and moving on through many artists to high profile street painters Shepard Fairey and Banksy. One of the important aspects of the filming of these artists and their work was his accidental documenting of a risky and short lived art form. As Banksy states, “Most art is made to last hundreds of years, but street art has a short life span… It needs to be documented.” This footage has given us the opportunity to see artwork that no longer exists and talk to some of the artists who create it and learn their motivations and desires that they put into their craft. We also see and feel some of the danger and risk of arrest that these artists accept to contribute their work to society as a whole- “I liked the danger… it made me feel good.” In a very real way, these artists create an art gallery outside in our everyday world.

Watching Thierry become an artist helped me to realize that I do ‘color’ my art with a perceived view of the artist and my understanding of their motivation/ passion. I didn’t find much of his work useful- it felt ridiculous and trendy. I didn’t really feel anything by minor interest, annoyance, or boredom looking at his copious quantity of work. I loved his motivation and success, but didn’t understand it or applaud it. I loved Banksy’s work and his desire to create but keep himself and his art anonymous from his ‘real world’ persona. I liked the way that street art “gained real power from perceived power” and how Thierry was able to help some of these artists see the reactions to their work from the public creating a true feedback loop. 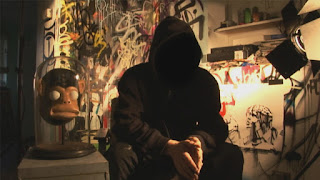 Banksy said a few things that really hit home for me. One is that “there aren’t supposed to be rules.” The idea of creation is just that… taking old or miscellaneous things and remaking them into something new and different from the sum of its parts. Thinking about how making and following specific rules to mass create work a bit like a shoe factory didn’t feel right to me. Another statement was, “Maybe art is a bit of a joke…” and I think he is right. Creation of any kind creates emotion of some sort and humor/laughter should clearly be understood to be part of that creative ideal. Another way to put that is “One man’s trash is another man’s treasure”- Tyler Glenn. However the most amazing thing that I took from Banksy was his realization that as Thierry had no clue how to make a movie, maybe he (Banksy) should try… and the result is this evocative documentary.

I love the way that each person’s art builds upon those who have come before them- how even an evocative picture of Barack Obama by a street artist has become such a cultural image recognized by so many. Yet most people probably have no idea how the image came about. I love the way that Banksy helped create this documentary even though he didn’t agree with all the ways that the art in it was defined. I loved learning and watching the different techniques used to create the art… even if that art may be covered over tomorrow. Lastly, I adored watching the teachers' semi dismay over the creations of their protégée… for this is a feeling that all teachers have at some point… for they must let the student learn the principles and then let them go to create their own path. A lesson for us all. 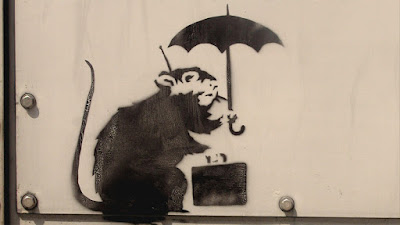 Posted by Badgerdown at 7:05 PM