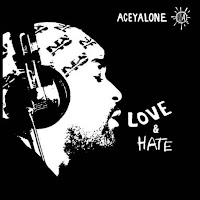 Today's song is titled “Ms. Amerikkka” and was produced and released by Edwin M Hayes, Jr better known by his stage name Aceyalone. This song is off of his album titled “Love and Hate” and it is extremely hard to find and listen to without purchasing the song or album. Every link to it I can find on the internet with few exceptions has either been removed or banned... censorship much? ; ) The lyrics are challenging as they personify and critique the United States of America... and the critique is devastating. Here is the one link that I could find to share the song and the lyrics are below.

all right
yo, this song came about one time when
I- I was- I was on a plane back, going back to Los Angeles
coming from somewhere else
and I sat next to this lady and she was telling me something
I don't remember it verbatim,
but I do remember some of the things she said
it was like this-

Life as we know it is about to change
I smell it within the air
the weather is getting strange
drugged up, sedated and
numb from the pain
the sickness in America has spread to her brain
she is no longer fit to make good decisions
she is completely blind and void of any vision
she parties hard and she keeps her conscious mind imprisoned
therefore she's headed for the ultimate collision
she can no longer hide the scars on her face
the innocence now gone is hard to replace
she has no shame, no remorse or any grace
she embraces the devil and she hates over race
Ms. America, the beautiful the free
fallen within the cracks, I wish that you could see
she buried her misery, within society
it's obvious, you have no regard for me

Ms. America, you've been a very bad girl
you nearly disgraced humanity in the eyes of the world
vanity has took you over, you're not deserving
the mirror image of your reflection is quite disturbing
she makes so many promises she couldn't keep
she neglected to mother her young, so they don't sleep
they scream out for justice, and then they weep
when out to blame Ms. America, that's what you reap
the audacity of your inventions to rule us all
the tragedy of your intentions to fool us all
you should have gave into nature and to the law
it's only a matter of time before you fall
the things you should of worked out in your first colony
victim of your own advice and your psychology
you've destroyed all morale and the ecology
I'm sorry, but I don't accept your apology

Homeless America, so much attraction
has yet to take ability for her actions
we work around within the system and make adaptations
you can let freedom ring, within your faction
how can people still be hungry, when there's a surplus?
suffering within your home, you've made them worthless
damn near police the state, you make us nervous
even though some conform and join your service
you're presidency's the biggest joke, but we're the laugh
always smell the gun smoke, on your behalf
I think I should send a telegraph to your staff
America you're down and dirty, you need a bath
so tell your secret agents, don't be paranoid
this wasn't taught by Socrates or Sigmund Freud
this is simply gods work, you can't avoid
ever nation ever built has been destroyed


Are you still with me... or did I lose you? I suspect some of my readers will not make it this far. Here are my thoughts on this piece of rap and verbal art.....

One of my first thoughts was shock when I tried to watch the video on Youtube and other sites and got the rejection message "can't be viewed in this county." It is a bit of a strange irony that we (the USA) as a nation chastise and bully other nations into accepting free speech that is critical of the government/ ruling party, but maybe we too as a society (or just the powerful class) also silence are critics when they get too close to the mark.) As I read the lyrics and listened to the words, I could see the images of people in my communities and on television; the lines of families at my local food bank, the homeless shelters filled to capacity, the bitter cold keeping the couches of good friends full as well, the individuals who lack health insurance who struggle on without treatment, those whose mental health is tottering and broken who can not get help until they are incarcerated for long periods of time... and then are forgotten when they are released until they begin to struggle again and are forcibly returned... I saw so much and I felt sadness, hopelessness, exhaustion, and anger.

All of my life I have been told how great this country is. From lessons at church where teachers praise me and others for being the most valiant spirits in our pre-existence to be born at this time and in this country- the country that God the Father fore-ordained to be the place of true Christian gospel restoration. From my parents whose patriotism is strong - sometimes extreme- and would express how lucky I was at every opportunity to be an American. To teachers who taught me how some countries do not let girls go to school and might even be forcibly mutilated or murdered for doing things I took for granted like reading. I grew up believing I lived in the best country in the world and that God willed it to be so; in fact, God actively keeps America the top country in the world. It was only as a young adult that I started to see things and hear things that I struggled to reconcile with these past teachings. Experience has certainly changed and nuanced how I see the United States now - both in a larger sense and in the small communities I try to volunteer in. In these lyrics I heard some of the pain I have felt and witnessed from the humanity around me. The title itself tells two stories to me. It feels a bit arrogant for citizens of the Unites States to be called "Americans" while any other citizen of another country on both American continents are monikered differently. Someone from Canada or Mexico, Chili or Columbia is just as "American" as we are yet each of us if asked what are nationality was would state "American" like each of us is part of the cherry on the top of the sundae. I do it as well, but when I hear myself say it I find I feel a discord in my head and I have wondered if one of the reasons people in other countries stereotype us as arrogant, etc... is our attitude which is reflected in what we call ourselves and how we behave. The second lesson I see is that the title expresses some of the failings of how those in power and how our culture treat minorities. America is not a land for the faint hearted female, the financially poor, nor for individuals of color or disability because, whether by intention or design, society tends to isolate, restrict, stress and even cannibalize them. The title expresses to me the hidden and not so hidden racism in our society and in our hearts and the double edged view of how important women are, but only when they conform to specific gender and cultural roles. After all, the United States is usually portrayed by an old white elderly kind "Uncle Sam"... anyone else can be seen as falling short of this ideal.

The line that really stuck in my head out of the whole song was actually almost the whole third verse because as America is being described as female, she is being lectured on her lack of tradition femininity. For instance, the word disgraced isn't a word usually used for the male gender. She is described as vain, not deserving, a neglecting mother who lets her children cry and scream and weep... and does nothing so her compassion is lacking as well. She is blaming, audacious, and tragic... the destroyer and the victim. I really cannot think of any time I have ever seen or heard "Uncle Sam" described in this way and it feels like this song expresses the true fight of women in this country- our services and talents are accepted and incorporated by the men in our lives yet all failures are prescribed to the females involved while men can whip the flung mud off more quickly and easily. It almost feels like the author of the song who has clearly seen and felt the sting of racism doesn't recognize his own biases and discrimination towards women. I know this sounds a little angry and funnily enough I am not angry as I write this- just a little resigned.

What are your thoughts and feelings on this song?
Posted by Badgerdown at 7:48 PM