The Day of the Bird... and the Cheating of Crows


Is it just me or am I suddenly running into all the hurt and still living creatures I can lately? Before anyone thinks that statement is a complaint, I want to stress that it's not... just an observation that disturbs me a little. Mostly because if one person is finding so many injured animals, how many are out there right now? It's like for a brief moment in time a window has opened up in my mind to a different way of seeing and like the boy Cole in “The Sixth Sense” who finds his vision and what he sees is different from the people around him... “I see hurt animals.”

So the first Sunday in July started out like a fairly normal fast Sunday. I had prepared and packed the car the day before for an easy morning. I gauged whether I could fast without throwing up or if I needed to eat to even make getting to church possible. I had even set out my clothing the night before. And so pretty early and quickly I was driving down the road towards the church listening to some inspirational music – well, inspirational to me anyway. ;) I had managed to almost get to church when I saw an obstacle in the road and as I slowed the car down I realized the obstacle in the road was a dog. Shoulders bowed and just sitting in the very middle of the road, he didn't even look up or flinch as I came to a stop. I pulled over for a good look, and the dog let me get pretty close. I gave it some of the dried shrimp in my car and called the police and I slowly doled out the food until a nice officer showed up and I completed my journey to church. I came with quite a few things to take into church and so I started unloading and making my several trips in and out of the building. It was during one of those trips to the car that I was distracted again.

I walked out of the building at one point and the noise from overhead was pretty loud. I could hear the distinct cawing of the crows- loud and raucous and the anxious twittering of a smaller bird. So my footsteps walked past my car to the side of the building and I found myself standing under the canopy of the trees watching the drama above. Three crows were actively irritating a pair of robins who were desperately trying to protect their nest and their young. I watched as one or two of the crows would lure both of the parents away from the nest and then the last crow would nip in and steal one of the robin fledglings and fly away as quickly as possible. The parents would return desperate and full of anxiety and then the crows would begin when another would show up. Slowly but surely, they were emptying the nest. I stood there, wishing I could change something and knowing that I could do nothing, when the last fledgling was captured and the crow turned in midair and flew in my direction. I must have been so quiet that the crow hadn't even noticed my presence because when it caught sight of me, the crow tried to change direction too abruptly and dropped its hard won package at my feet. I didn't even hesitate and leaned down, scooped it up in my hands and looking up at the crow, I quickly walked away. Back into the church with my hands carefully closed and cupped, my mind racing trying to determine a path forward. I remembered some boxes that were waiting to be thrown away in the library and headed there and within a few minutes the bird was sitting in a box in the dark, quiet nursery to calm down and rest. 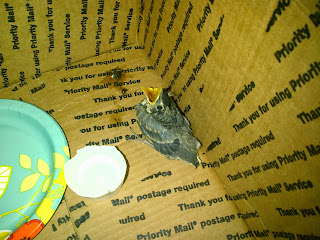 I had hopes that I could return it to the nest but during the hour before Sacrament meeting started, I realized that was no longer an option. After several trips outside I realized the robins in their sorrow and loss had totally abandoned the nest, but two crows were waiting right next too it. For people who think birds have no brains, they are certainly at least incorrect when thinking of crows and ravens. They can plan and work together quite well (as can be seen by their brilliant and successful attack on the nest.) When I would walk over and look up into the trees, they simply watched me and waited. When Sacrament meeting started, it found the bird still resting quietly in the nursery and my bum settled into a pew. A quick glance outside during the meeting confirmed that the crows were planning on continuing to wait- whether they knew I wanted to return the bird or they just knew the fledgling was still around I do not know. It was clear however that I now had a bird. A very needy, hungry bird. 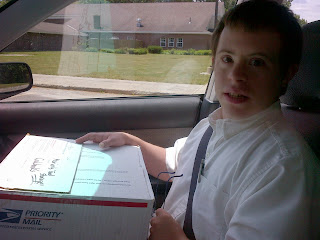 So nursery began and I introduced my youngsters to the bird and several times we carefully broke off tiny slivers of our grapes and dropped it into its open and begging mouth. The fledgling would cry and we would feed it. The kids were pleased, the fledgling didn't seem too worried and our lesson on appreciating God's creatures seemed to be more easily cemented into the young one's heads. And with the help of my helper, I made a quick call to Birds Acre and found an opening for the wee robin. This is the second time that I have used this resource over my life to help a bird and I am so grateful for its existence. After church, all the youth came and took a quick look and then my good friend Michael hopped into the car to lovingly cradle the box in his lap. We drove to Bird Acre and I was able to stand back while Michael talked with the volunteer and they both wandered towards a cage with some robins and fledglings. When they returned, Michael and the volunteer were all smiles and said that their disabled mother had happily started almost immediately to feed the little fledgling with the other foster birds. So with some handshakes and smiles, we departed and left the unintentional orphan to its new fate.

What an unusual day. I feel so much distress an anxiety over the hurt but I left feeling a bit of peace. I dd the best that I could do and I am aware that many people would have heard the loud caws and cries and not known what they meant- there was a blissful time in my life that I wouldn't have known either and would have just found the sounds annoying and would have moved in the opposite direction. As with the poem of the starfish, I couldn't help them all and at least four fledglings were taken and happily eaten by the crows... but my actions and my service mattered to this one... and that has made all the difference. I hope he makes it! :) 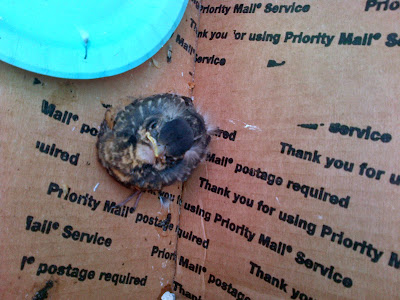 Posted by Badgerdown at 4:48 PM