“It's Your Funeral”... and Thoughts on Humanity's Continued Search for Itself

I have never had any interest in westerns and the culture that surrounds them. In fact, I think I have only considered them something that might be worthwhile because my grandfather likes them. So when I discovered this film on the syllabus I didn’t really have much to look forward to. I recognized John Wayne from pictures and posters and country 'accents' that you can buy in stores and that's about it really. So I thought that the majority of my fun with the film happened with my experience of purchasing it. I must admit that I enjoyed my time at Bull Moose with the clerk who took me around the store looking for it. He walked me around while he wore a really crazy hat that flopped around and when any of his co-workers asked what we were doing he always answered with the same phrase, “Us? We're searching for the Searchers.” It was a bit funny :)

So I got it ordered, picked up and sat down to watch it with more than a little feelings of just blah. The first five minutes convinced me that I was in for a few hours of difficulty, maybe not boredom, but not really any interest either. I got a large glass of grapefruit juice and slouched down on the couch to keep watching but also so I could continue to watch the snow coming down outside the window and the sun slowly dissolving into the dark. I then spent two hours watching the saga of Ethan Edwards and his search for his missing niece named Debbie Edwards after she was stolen by a Comanche Indian raid. He traveled back and forth for over five years with a companion named Martin Pawley- an adopted young man who lived with and grew up with Debbie and her family.

“And he sent them to Bethlehem, and said, Go and search diligently for the young child; and when ye have found him, bring me word again, that I may come and worship him also.” - Matthew 2:8 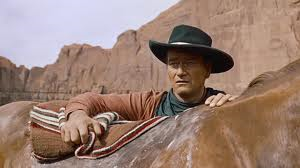 Ethan was a very interesting character. All of his opinions and thoughts bordered on arrogant and... for lack of a better word, macho. His obsession- the only word that makes sense in this case- with looking for his niece was confusing when you looked and comprehended his thinking of what makes family as well as his thoughts and anger towards the “Comanche' – anger that appears to come from past experience and dealings with some individuals from that Indian group. Family, or 'kin', to Ethan is a very simple thing. Blood and blood only makes family. He can't seem to see it any other way. His views on women are very stark as well – if you live with Indians or accept them, then you are damaged and shouldn't live. These stark, unbend-able views make his obsession with finding his niece even more challenging to understand... after all, why search for a girl for years and then wish to kill her when you discover a women who is married to an Indian chief? How can a man compartmentalize his feelings so clearly that he is unable to recognize the inherent clashes his own views will cause?

Funnily, enough... that does make you 'kin' in my book. I see family as those who stick by you, who love you, who look out for you and with whom your life would not be complete. I have many family members who share my blood, but I know people who share my blood and who really are not family. I have family in whom no related blood flows, but in all other ways they are my kin and I cannot see them as separate. I grew up with three grandfathers and while a child should never have a favorite, I did and still do to this day. Grandpa Carlile is the grandfather that I think about, I miss, and I know I will feel the loss keenly when he is no longer able to be a part of my earthly life. Sometimes, people remind me that he shares no blood with me- that he is my step-grandfather... but that label isn’t who he is and doesn't change who or what he is to me. If he had been kidnapped and lived in another culture for a while, I wouldn't hesitate to take him back... no matter what. As with all obsessions, Ethan puts everything he's got towards his plan and desire to find and rescue Debbie, but is unable to see the reality of what he wants. When he finds her, she can't live up to his expectations (can any obsession do that?) It takes more experiences and time before he is able to learn not only about how to understand and deal with the reality he faces, but also to actually understand himself. I would wish him happiness with his new understanding of humanity and even family, but as he is really a fictional character.... I will simply try to remember the lessons of the character.

Ethan - “No. A human rides a horse until it dies and then he goes on foot. Comanche comes along, gets that horse up... rides him twenty more miles... then eats him.” 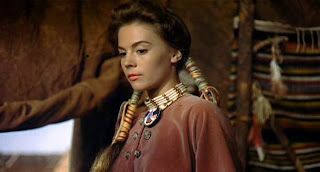 Another problem that plagues Ethan is his discrimination and dislike of Native Americans... the Comanche in particular. He is unwilling for a great deal of the film to listen to or recognize Martin as being a human on the same plane as himself (Martin is one quarter Native American). His attitude of dehumanizing the Indians allowed him to see anyone who fit in with them as bad, not worthy of even living... damaged beyond repair. This movie was made over sixty years ago and this is a problem that we all still fight – as individuals and as a society. When someone angers us or does things that we do not approve of, we strip them of all the positive traits that they have... making them almost one dimensional with only negative qualities and stereotypes. This makes it easier for us to justify the poor treatment ans thoughts that we have toward them. It is this way of dehumanizing and 'othering' different people that has caused every genocide in this world. It is how we justify discrimination and violence towards others. And it is how Ethan justifies his attempt to kill Debbie when he finally finds her at the end of his quest. Sometimes I think what we are really looking for is to appease and justify our mistakes – by blaming others or hurting them. It is our search to understand and love ourselves that can be our way to peace... or the path to hatred and scapegoating. Martin Pawley finds himself unable to stop searching for his sister and follows Ethan over the country for years – sacrificing his potential wife Laura as well as good financial prospects- even when it is pointed out to him that is sister isn't his 'kin' because he is adopted. Even when he is told that the Comanche chief Scar murdered his mother, he is unwilling to focus solely on revenge... the life of Debbie is still more important. How many of us sacrifice so much for another person? For someone who many even today would say wasn't even family? 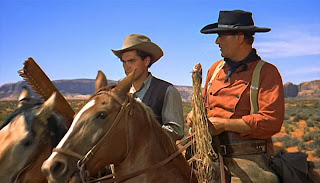 In the end, I sat back on the couch and thought about Ethan and Martin. I thought about how Ethan feels like the side of us that is angry and fearful and courageous and doesn't really think... and Martin is the 'one who follows' and pure love... charity. He feels fear and he feels angry, but he channels it and uses it to try and do what he feels is right for others and not what is necessarily all right for himself. Like the Super- Ego and the Id, parts of the same consciousness fighting to be the dominant partner.... which part of us will win the battles that we chose? Will we approach those who believe or behave differently than us with curiosity and tolerance... or will we allow ourselves to act out our fear and hatred with ourselves and our behavior on others? We are given these choices everyday... sometimes several times a day.... how we act says a lot about us and our character. If nothing else, I learned that the struggle to be tolerant and open is a problem that we have struggled with for centuries and we do not appear to be any closer as a race to understanding. I believe that Heavenly Father gives us more information and knowledge when we are ready for it – both individually and collectively. No wonder so many people think that God has stopped talking to us... we as a race are really slow to learn so how can he give us more information? In the end, Ethan Edwards is right: it is our funeral. And how we chose to get there is our choice most of the time. So what choices are you making? Are you choosing love and tolerance... or are you choosing anger and fear? In what ways are you judging your fellow humans poorly? If you have seen this film, what are your thoughts? I probably won't watch it again... I will actually probably send it to my grandfather who will probably love it. But I am glad that I watched it. :)

Posted by Badgerdown at 7:56 PM