Stories from the Bible: Tamar

One of my favorite people to think about in the Old Testament is Tamar. Many people haven't actually heard of her and I suspect that's for a few reasons. With very few exceptions we do not hear much about women in the scriptures anyway and those exceptions tend to be women who are being held up as bad examples. A wonderful LDS feminist named Laurel Thatcher Ulrich wrote a book whose title has become quite a popular catch phrase that pretty succinctly makes that point: “Well -Behaved Women Seldom Make History.” Another reason is that in many ways, Tamar's story is very peripheral to even the group of stories that she is in. One of the things that I find interesting is that her story was even included at all... and I think of the thousands of women whose stories weren't included at all. I wonder what makes her story so special in the fact that it was considered important enough to include it or if her story was only included because of the men in it. 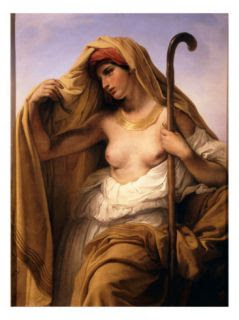 Tamar's story is short and actually begins when she is old enough to marry. In Genesis, Tamar is first mentioned when she married Judah's oldest son named Er. That marriage was short lived as her husband dies due to his wickedness and Tamar was left widowed and childless. According to tradition, Tamar would then be married to the next oldest son to create children/heirs for her deceased husband. So she was married to Onan, who had no interest in creating any children as they wouldn't be 'his' to claim and so he would pull out before of Tamar while having sex with her so that she couldn't get pregnant. Onan also died prematurely and soon Tamar was widowed and still childless... again. Tradition would have her married to the next brother (whose name is Shelah), however, Judah is portrayed as being pretty wary at this point. Wondering if Tamar is cursed, he feels reluctant to promise his youngest son and so he tells Tamar that she must wait until Shelah reaches manhood. Tamar, having little choice in the matter, waits and even after Shalah is grown and Judah himself becomes a widower, she is still waiting. It becomes clear that Judah wasn't willing to risk his last heir but marrying him to her. 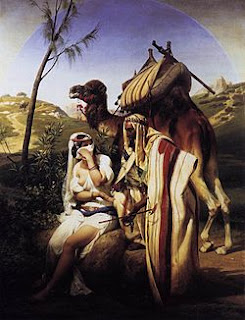 The writer doesn't mention how long it takes Tamar to realize that Judah never intends to follow through on his word and that she is trapped in a perpetual circle. She is back with her family waiting to return to her new family... yet she has little to no status in her new family heirarchy as she is widowed, alone and childless. Unable to marry anyone else to change her situation and yet betrothed but alone, she makes a really interesting and brave gamble. When her father in law, Judah, is headed to a different town for business, she dresses up and sits by the city gates, suggesting by this positioning and environment that she is a prostitute. It is thought that she had knowledge that he had sometimes used prostitutes at that area and as the women would wear veils to disguise their identity, that could help her do so as well. Things apparently went according to her plan and her offer was accepted. Judah didn't have any money so after the services were rendered he offered to send her a goat from his flock. As a pledge, she accepted his staff and his personal seal which were items that were of great worth to him. Later, when a friend of Judah's comes with the goat to make payment and exchange, no one could find the prostitute. Tamar had gone home to her family and had no told anyone around the area who she was and didn't tell her family what she had done. So Judah kept the goat and didn't say anything about it so that he could hide his embarrassment as well as the sin. 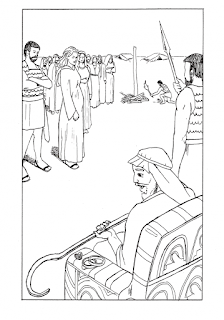 Some months later it became apparent that Tamar was pregnant... an unacceptable condition for an unmarried woman during that time. When the news of her pregnancy makes its way to Judah, in his anger and his position as the tribal leader, accuses her of 'playing the whore' and sentences her to death for her adultery (Even though she is currently unmarried, she is still betrothed to Shelah so her actions would be considered adultery... as well as the actions of her partner.) When Tamar learns of her sentence, she appeals to Judah giving him his staff and seal and letting him know that the 'owner' of them is her 'partner'. In his words, “She hath been more righteous than I; because that I gave her not to Shelah, my son” - Genesis 38:24 Realizing his culpability as well as his potential difficulties, Judah admits his guilt and he acknowledges the appropriateness of Tamar's behavior. She later gives birth to twin boy who are named Perez and Zerah.

I find many things about this story interesting to think about. One thing is something I mentioned before. Why is this particular story including in the book and was considered important enough to write down in the first place. The only characters that are consistent in the story (or at least survive through it) are Tamar, Judah and Shelah. Judah is one of Joseph's brothers (the Joseph who was sold by his brothers and send to Egypt) and the leader of his own tribe. He was married and he had children with her. Judah chose Tamar to be the wife of his oldest son Er so he, in theory, knew a bit about her and her family. What we know about her family is that she was probably not Jewish as she in not listed or named as a descendant of Abraham, Isaac or Jacob. Tamar can be seen as a women of integrity doing all she can to follow the cultural rules of her tribe and and Levirite law. She could have either married into a different family or simply stayed a widow. However, she could also have been seen as a co-conspirator with both of her dead husbands and therefore, immoral. Her choice to follow the 'higher' law as set by God and to try and create an heir for Er was risky and dangerous to her reputation as well as her life, but did end up working out for her. In fact, her son Perez gives her not only blessings (and is mentioned in the story of Ruth later in the book), but Perez makes her a direct descendant of King David and part of the Messianic line to Jesus Christ himself. Some people have suggested that the story of Judah and Tamar is put in the scriptures to emphasize how good Joseph was in comparison to his siblings. This story even seems to suggest that Tamar herself was more loyal to the tribe of Judah than he was himself. 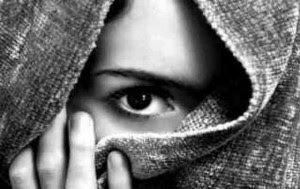 Another thought is I really wonder how Tamar was able to pull off the trick. Judah helped pick her for his first son as a wife, married her to his second son who then dies, and was concerned enough about her potential to cause harm to his last son that he risked the wrath of God, etc to not keep his word on the betrothal. His quick temper and enthusiasm to accuse her of adultery and sentence her to death without really talking or doing any research on it suggests to me fear of her as well as anger. So it begs the question: how did he not recognize her... even dressed as a prostitute and not a widow? Can any of you when thinking of the people in your family contemplate the mistake he made? How could he possible not recognize something- voice, movement... anything? I guess I find that stunning and semi- unbelievable.

I also wonder how Tamar felt through all of this. Did she love Er...? Since her marriage was arranged, were they friends, tentatively polite...? How did she feel about marrying her brother in law... and his treatment of her? Heck, what if she loved her first husband and afterward had to deal with her grief and changed circumstances while marrying a man she did have feelings for.... or worse, didn't like at all. Certainly his treatment of her if she did want a child must have been hurtful and frustrating. Then Onan died and here she was alone again... back with her family and childless. 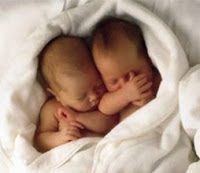 Then the waiting, watching Shelah grow up and imaging her potential life with him... and then realizing it wasn't going to happen. I wonder how long it took her to come to that conclusion and the mixed emotions that came with that.... When she made her plan to prostitute herself to Judah, was it a happy plan.? She didn't really have any way of knowing for sure that it would be successful and end in pregnancy? Would she have been willing to do that more than once...? Did she do that more than once? If nothing else, she must have had some decent acting skills. :) What a painful and challenging set of circumstances for anyone. Some versions of the story suggest she was celibate for the rest of her life while other versions suggest she lived with Judah as his wife and together they raised the twins... how did that work for her in either situation? Were her children worth it for her? Does she have regret for any of this?

Posted by Badgerdown at 8:59 PM