A Night of Solid Dreams 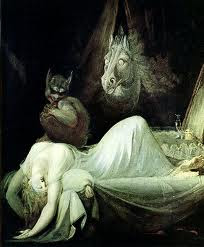 Friday night was absolutely amazing...! (Probably not the way to start a post without having it potentially misconstrued- so don't worry! It's clean. :) I have been struggling to really sleep for months. Sometimes I will get a decent night of sleep, but for the most part I just toss and turn and get up and read or listen to music and eat and play with cats or my hammy; in essence, I don't sleep. When I feel so emotional and tired that I am truly desperate I will try to work myself out of any potential thread of energy left, fill my stomach full, and take two benadryl and I will usually sleep. I will still wake up and toss, etc... but I can go back to sleep easily on those nights. One thing that tends to bring me back to wakefulness is clearly my thoughts and worries and plans as I am trying to move forward and get through this difficult time to find an easier path. The other thing that forces me awake and tends to keep me up is dreams, which have been really challenging over the last few years. Some are so bad that I wake up totally covered in sweat and just panic stricken. In some cases it takes me a little bit to realize that it was a dream and so I am confused about the change of scenery and dress. I understand that dreaming in color is not very common so it is a blessing that I have, but I do wonder if that helps with my mental confusion after some of the really horrible dreams. When I come to work and look pretty awful after a bad night, I will joke about being 'hag-ridden' and we can all have a nice laugh, but I will admit its definitely not funny at the time. I have seen some paintings from past centuries where artists have tried to portray the fear and confusion and of course the 'witches' and 'demons' that caused them. Those painters do not inspire laughter... at least in me.

This week was a typical week. I have been working a lot of hours and haven't been sleeping well at all. Charity is learning to follow food through a hoop and I have discovered that Egg likes smoked salmon and he will try to open the fridge door to get it- that's a big step for him. Several weeks ago I tried an experiment and I took apart the mattress I made and I folded down my 'couch' futon and I have been sleeping on it. I haven't really noticed a difference in my sleep the last week so it sort of confirmed to me that not only do I definitely have insomnia at this point, but it's probably my head or 'me' physically and not anything in my environment. Disappointing, but doable I guess. So that night I was tired and just started to do the normal getting ready to sleep stuff. I got off of work and then ran a few quick errands so that I would be all ready for the Sabbath. I got home, emptied my car and then got to work on the house. Soon it was spiffy and I had heated up a quick meal with lots of fat (I think it helps me feel fuller and sleep better) and I had a nice hot bath. When I came home I had a package from an awesome friend and it had a light but snug king size comforter in it and so I climbed into bed after my bath with a good book and that comforter. As soon as I felt like I could sleep, I put down the book and I actually slept for six hours... a real record for me these days.

The kicker was that I still dreamed and the dreams were really intense. I have been working on trying to mentally 'change' the dreams, but I have had very little success. I'm either so tired that as I try to change it I fall so deeply back into it that it doesn't work... or I become so frightened that I am pushed out of the dream altogether and then I'm awake for awhile. This night, I don't actually feel like I mentally changed anything. The dreams were not as bad as usual, but I felt like the images were seared into my brain along with the emotions that they caused so that when I did wake up I was sure of a few things. One image that happened a few times in the dream was that I was following either a ex-friend or walking with a current friend. When I was walking with the friend we were laughing and joking and just talking.... I'm not sure what was going on with the other scenario because I never felt like a stalker; just like I was in that position for a reason. At some point I would 'feel' something that I can't really describe... just a really strong feeling like something bad was coming and it was going to cause both of us to die. In both scenarios, I would reach out for the other person and would move them- either by pushing or tackling- and I would throw my body over theirs. At one point and I still feel and see this image inside, I looked up as I was crouched over my friend and the air was literally moving and pulsing.

I have been having this dream off and on for months and I have no idea what it really means... if it means anything at all. These images have come back into my mind over the last few days with the recent bombing in Boston and I have thought of the people who ran away.... and those that ran towards to sounds and terror. In my dream I knew something was coming so I could make a active choice and prepare myself... those who ran towards to terror were not sure what was happening or what they could do, but in that split second they decided to try. How wonderful and faith affirming is that! I hope we can continue to pray for all of us- in Boston, Syria.... in so many places where people are suffering through horrors and pain that many of us will never experience. I really hope that we as a race can keep working toward peace with each other. It is one of my fondest wishes.

Posted by Badgerdown at 9:02 AM